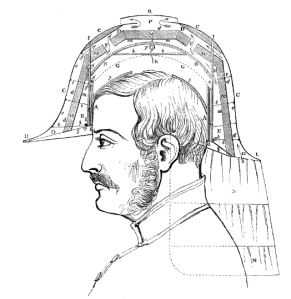 Only mad dogs and Englishmen go out in the midday sun, they say. But the truth of the matter is that during the 19th-century heyday of the British Empire, the sun was an object of horror for most travelling Englishmen. In latitudes south of the Tropic of Cancer, it was widely believed, midday sunshine had the capacity to do terrible injury to the brain of a European.

It was in British-ruled India that this peculiar belief gained most traction. In Rudyard Kipling’s story The Man Who Would be King a horrified official asks of a destitute adventurer ‘Is it true that he was half an hour bare-headed in the sun at midday?’ – and is by no means surprised to hear that the unfortunate fellow is dead as a consequence. Even if Kipling’s ill-fortuned traveller had survived, he would doubtless have gone completely doolally – a condition named for the Indian barracks town of Deolali, where large numbers of English soldiers reputedly let the heat go to their heads…

European travellers arriving in tropical British colonial possessions were deluged with sage advice from old-timers about how to survive the climate – stay indoors as much as possible, drink plenty of gin, and continue dressing for dinner as if it was the middle of an English winter being standard suggested tactics. But above all else, a visitor plotting an Indian itinerary or an African odyssey would be told, get yourself a sola topi…

The sola topi was the iconic headgear of empire. Similar in shape to an old-fashioned policeman’s helmet, but a little broader of brim and usually white or cream in colour, it was also known as a pith helmet, for the simple reason that its seven-inch dome was stuffed with the corky pith of the swamp-dwelling sola plant (many travellers mistakenly assumed that these thoroughly silly hats were actually called “solar” topis; unhelpfully they really were also known as “sun helmets”).

The belief was – and it was very sincerely held by everyone, including medical professionals – that without this deep padding of pith above the crown of your head, the deadly solar rays would drill through your skull in a matter of minutes, and would fatally scramble your brain.

Sola topis were considered so essential that the owner of the Simon Arzt department store in Port Said at the mouth of the Suez Canal made an absolute fortune flogging them at inflated prices to the passengers of eastbound liners who had forgotten to buy one back home before departure.  For a while it was even believed that you had to also protect your spine from the sun, and travellers in India would go about wearing a long tail of cork-stuffed cloth, pinned to the back of their hat and reaching all the way to their posterior. Quite what the locals – many of who sensibly dealt with the heat by wearing as little as possible – thought of all this fancy dress is anyone’s guess. 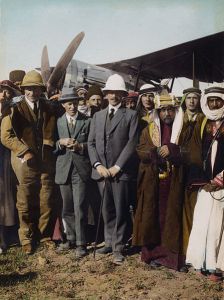 T.E. Lawrence – a fan of the Orientalist dressing-up box in other circumstances – trying to keep a cool head.

The curious thing about the craze for sola topis – which spread beyond British territories to the empires of the French and the Dutch – is that they only came into common usage in the second half of the 19th century, by which time Europeans had been thoroughly engaged in travel, trade and colonialism in hot places for the best part of three centuries. Plenty of previous generations had managed to survive the sunshine without going completely bonkers. The truth behind the ubiquity of this daftest of hats had more to do with racial identity, than with practical heat-avoidance.

The basic principle of wearing a hat when the sun is shining has always been a very sound one. And the idea of topping your hot-weather outfit with some sort of thick padding was nothing new. But there was already a perfectly good item of headgear, worn across continents since time immemorial for this very purpose: the turban. They wore it in North Africa; they wore it in Arabia; and they most certainly wore it in many parts of India. And here’s the thing: for around 200 years, Englishmen wore it too. ‘When in Rome’ (or ‘When in Rajputana’) was always a sensible approach, and throughout the 17th and 18th centuries plenty of the servants of the East India Company ditched their periwigs and frock coats on the voyage east and dressed themselves in loose-fitting robes and turbans as soon as they disembarked. It was comfortable. It helped you fit in.

But by the time Queen Victoria was on the throne attitudes had changed entirely, and the last thing an Englishman was supposed to do was try to fit in with “the natives”. Enthusiastically engaging with local culture and dressing Asian-style was a sure-fire way to end up a persona non grata in colonial society, and as for taking a local wife and converting to Islam or Hinduism – which was not unheard of in the 18th century – perish the thought! But the trouble was, turbans had seemed like such a good idea for travel on hot days… 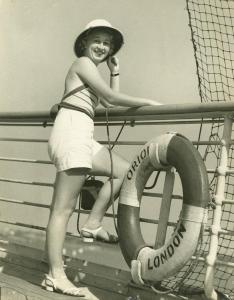 And so, enter the sola topi as a distinctly European replacement. The peculiar belief that you absolutely had to wear one if you didn’t want to lose your wits quickly developed. On one level, this idea of a morbid climate for which English folks were constitutionally unsuited was ideologically handy. It implied an essential distance from the place and people they ruled, and made it clear that any sort of acculturation – “going native” – was not only morally but also physically impossible (try telling the boys from the barracks, out roistering with their rum-jonnies that – but so long as you didn’t talk about such things, all was well).

But there was also a simpler truth: the topi was, ultimately, an uncomplicated badge of imperial identity.

The sola topi gradually began to go out of fashion in the early 20th century, and though there were always plenty of stick-in-the-muds who clung to theirs until the very last, by the time the sun finally set on the British Empire there were a fair few travellers who had realised that a simple panama hat – or even a knotted hankie – would do instead. And of course, as sunbathing Brits spread-eagled on baking beaches from Bali to Barbados demonstrate, these days the average travelling Englishperson has no fear whatsoever of the midday sun…

4 thoughts on “Tip-Topi: Hot Heads and Pithy Helmets in the British Empire”