The Travel Writing Tribe: Journeys in Search of a Genre
Hurst, 2021 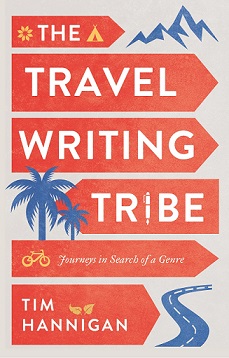 Where can travel writing go in the twenty-first century? Author and lifelong travel writing aficionado Tim Hannigan sets out in search of this most venerable of genres, hunting down its legendary practitioners and confronting its greatest controversies. Is it ever okay for travel writers to make things up, and just where does the frontier between fact and fiction lie? What actually is travel writing, and is it just a genre dominated by posh white men? What of travel writing’s queasy colonial connections?

Travelling from Monaco to Eton, from wintry Scotland to sun-scorched Greek hillsides, Hannigan swills beer with the indomitable Dervla Murphy, sips tea with the doyen of British explorers, delves into the diaries of Wilfred Thesiger and Patrick Leigh Fermor, and gains unexpected insights from Colin Thubron, Samanth Subramanian, Kapka Kassabova, William Dalrymple and many others. But along the way he realises how much is at stake: can his own love of travel writing survive this journey?

“Marvellous … a timely look at the genre – why we travel, and why and how we write about it” – Irish Independent 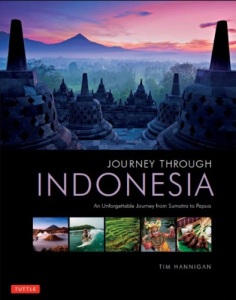 This lavishly illustrated, large-format book takes readers on a tour of the world’s greatest archipelago, a vast island nation with all the diversity of an entire continent.

Made up of more than 17,000 islands and stretching more than 3,000 miles end to end, Indonesia is Southeast Asia’s biggest nation, a place of endless contrasts and myriad cultures. This book is the perfect introduction to this most colorful of countries, for both armchair travelers, and those plotting their own explorations.

With more than 400 stunning photographs, Journey Through Indonesia provides a lively introduction to the country’s geography, culture, history, arts and crafts, and wildlife, before taking readers on a trip through each of the major regions—from the temples and volcanoes of Java to the beaches of Bali, from the national parks of Kalimantan to the traditional villages of Nusa Tenggara, and beyond. 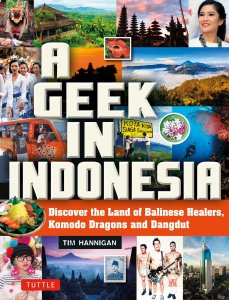 A Geek in Indonesia
Tuttle Publishing, 2018

For anyone wanting to get beyond tired travel guide clichés, this is a hip, irreverent and streetwise introduction to Southeast Asia’s biggest country—from local fashion bloggers and feminist activists to furious punk pioneers and scandal-courting celebrities.

Discover the dubious delights of dangdut—Indonesia’s homegrown working-class music phenomenon—and the dizzying diversity of the rock, pop and jazz scenes. Learn what makes Jakarta the social media capital of the universe; take a look into the Indonesian blogosphere; and get essential insights into the traditional values that still underpin tech-savvy modern Indonesian society.

“… a window into another culture and a travel guide all rolled together.” – Dr. Jessie Voigts, Wandering Educators

A Brief History of Bali 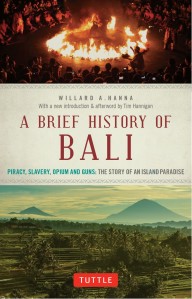 Previously published as Bali Chronicles, this fully updated edition of Willard Hanna’s classic narrative history of Bali comes with a new introduction and extended three-part epilogue by Tim Hannigan, carrying the story into the twenty-first century.

With a strong emphasis on colourful characters and dramatic incidents, the book tells the fascinating story of Indonesia’s “island paradise”, its rulers and its people, and their encounters with the outside world. It sketches the culture and politics of the island against the backdrop of an economic dilemma that has confronted the Balinese for centuries – how to preserve their unique identity in the face of foreign incursions.

A Brief History of Indonesia 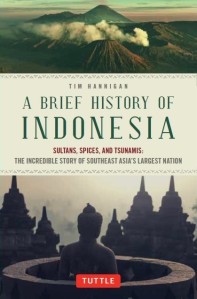 Indonesia is by far the largest country in Southeast Asia and fourth most populous in the world after the United States. It is also the world’s largest Muslim-majority nation, a land of incredible diversity and unending paradoxes with a rich history stretching back a thousand years and more.

This fascinating book takes the reader through the Hindu-Buddhist years in Java, the arrival of Islam in the archipelago, the Second World War, the postwar New Order years, to the separation of East Timor from Indonesia at the start of the twenty-first century.

Tim Hannigan tells the story of Indonesia as a narrative of kings, traders, missionaries, soldiers and revolutionaries—featuring stormy sea crossings, fiery volcanoes, and the occasional tiger. For readers who want an entertaining introduction to Asia’s most colorful country, this is the perfect read.

Raffles and the British Invasion of Java 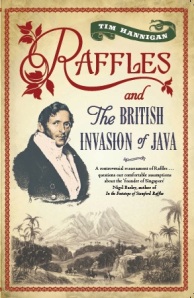 On a hot August afternoon in 1811 an army of 12,000 British redcoats splashed ashore through the tropical shallows off Batavia to conquer the Dutch colony of Java. They would remain there for five turbulent years.

Told in full for the first time, this is the gripping story of how the British attempted to bring the full force of European colonialism to a tropical island where Muslim sultans claimed descent from Hindu gods. It is also the story of the man who presided over that attempt – Thomas Stamford Raffles, destined for future fame as the founder of Singapore.

Drawing on both British and Javanese archive sources, this book explores the bloody battles and furious controversies that marked British rule in Java, and reveals Raffles – long celebrated as a liberal hero – in a shocking new light, showing how he crushed dissent, looted palaces, and incited massacres to further his own insatiable ambitions.

Murder in the Hindu Kush: George Hayward and the Great Game
The H 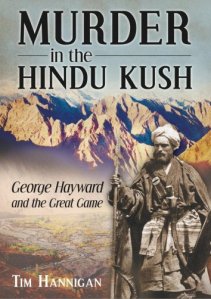 On a bright July morning in 1870 the British explorer George Hayward was brutally murdered high in the Hindu Kush. Who was he, what had brought him to this wild spot, and why was he killed?

Told in full for the first time, this is the gripping tale of Hayward’s journey from a Yorkshire childhood to a place at the forefront of the ‘Great Game’ between the British Raj and the Russian Empire, and of how, driven by ‘an insane desire,’ he crossed the Western Himalayas, tangled with despotic chieftains and ended up on the wrong side of both the Raj and the mighty Maharaja of Kashmir.

It is also the tale of the conspiracies and controversies that surrounded his death, while the author’s own travels in Hayward’s footsteps bring the story up to date, and reveal how the echoes of the Great Game still reverberate across Central Asia in the twenty-first century.