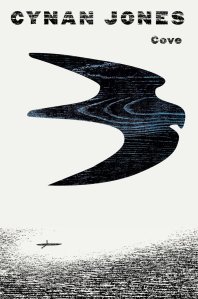 The first echo is there in the physical form of the book itself: a slender pinch of pages, little thicker than a floor tile; a thing to be handled carefully as if it might break, and to be read with a delicate dabbing, like eating some rare dessert. The next echo is in the form of the story within: a man in a tiny boat, striving shoreward. And there’s an echo in the sparsity of the style too.

And yet somehow it isn’t until a nine-word paragraph, put delicately in place on the forty-sixth page – which, hereabouts, is halfway through the book – that the recognition passes under you like the bow-wave of a bigger ship:

Cormac McCarthy, Bruce Chatwin, and, above all here, Ernest Hemingway: these are clearly Cynan Jones’ writers – the writers that every young man wants to be, usually with disastrous results. It’s some measure of his skill that he can have those influences yet never descend to posturing and pastiche. It’s yet greater measure of his skill that he can have written a book which nods so very directly in the direction of The Old Man and the Sea, but which you can read almost without noticing as much.

All of Jones’ books have been slender volumes, and Cove is certainly short. Flicking through, you might mistake it for a book of poetry. Broad margins; acres of white space. There are pages where few of the paragraphs stretch further than a single line. The style is as careful as poetry too. I am a very slow reader, and I was stopping to reread a passage every few pages, to feel its sharp edges carefully. But I was still done in an hour and a half – an hour and a half during which I slowly hunched tighter and tighter over the book, with the noisy clatter of the café in which I was reading fading like the sound of the waves against the shore as you paddle for the horizon.

Put simply, the story of the book is this: an unnamed man – young, or youngish, rather than old here – heads out to sea to go fishing in a kayak, freighted with a recently deceased father, and the imminent birth of a child; a freakish lightning strike comes; there follows the terrible physical and mental ordeal of an attempted return towards shore with memory and body shattered. The location of the narrative is never stated, and yet you know, without doubt, that it is somewhere in west Wales, as it has been with all of Cynan Jones’ books. (Perhaps this is one of the reasons for his success in drinking down those strong influences: he’s eschewed the globetrotting and gallivanting of Hemingway and Chatwin, and swapped McCarthy’s vast Western spaces for the smallest thumbnail of Celtic coastline.)

In the story of this ordeal, Jones does the compelling stuff of physical endurance, of making do in extremis, familiar from The Old Man and the Sea or The Road: a line cutting into flesh; filleting a fish with one hand crippled; the task of paddling landwards made herculean by a lost paddle. There are also the moments of strange beauty that are often a feature of such tales: a sunfish, flapping against the plastic of the boat; a wren’s feather trapped in a mobile phone casing; a doll, adrift in the deep water. And there are images of the sort that mark the finest of observational writing: the imprints of barnacles left in the skin of a pregnant woman’s belly after bending over rocks at the shore.

But with never so few words he brings so, so much more to this story. His other books have also had the alchemic quality of the condensed epic. This was particularly the case with his debut, The Long Dry (which remains one of my very favourite books read in recent years). In the space of fewer than a hundred pages and in a narrative covering a single day, it managed to range hugely through two whole lives, voyage back through generations then – utterly devastatingly – into the near future, all while meditating magnificently on the corruptibility of the flesh.

With Cove, though, he pares things back to the very utmost, yet somehow leaves an enormous sense of a man in full (the book’s title, as the epigraph makes clear, is a double entendre: cove, a small inlet, and cove, a fellow, a man). Cove is like some experiment in mortifying asceticism, an experiment so successful that every word has significance and the simplest line on the starkest page can slap you hard like a sudden wave as you try to land a kayak on a steep beach in a running swell, leaving you – and I really do mean this, physically – struggling for a moment to catch your breath:

He could not picture her, but the sense of her came back.

It’s hard not to be hyperbolic about this book. If someone told you that a Welshman had written a sort of Wales-set twenty-first-century homage to The Old Man and the Sea that somehow manages – in even fewer words – to be a bigger, more emotionally loaded book, you’d be forgiven for laughing. But you shouldn’t laugh. You should buy Cove, and holding it very carefully, hunch yourself up over its pale pages, draw a deep breath, and begin to read…