I’ve been thinking a lot about Surabaya, after the dreadful events there at the weekend. The city was my main base in Indonesia, on and off, between 2006 and 2012, and I miss it in sudden unexpected moments. For me, Surabaya was always a night city. In the white heat of the day it could feel flattened, dulled. But after dark – which comes in early there, and with the quickness of a drape falling – the city seemed to rise up into itself. Here’s a piece I wrote about Surabaya during its waking, nocturnal hours for the Jakarta Post’s Weekender magazine in December 2007.

5.30pm; Saturday. From the high rooftop of Tunjungan Plaza the sprawl of red-tiled houses curves away in all directions. A late flight to Jakarta is roaring westward through the paling sky, and the lights of the big advertising hoardings are flickering on. The sun – a crimson thumbprint in the murky air of the East Java capital – touches the horizon.

“Allaaaaaaah uh Akbar…” From the city below the call to Maghrib prayer rings out into the dusk. Night has fallen over Surabaya.

Every town shows a different face at night, and Surabaya, a vast collection of villages by day, seems like a real city after dark. Tonight I plan to stay awake until dawn, criss-crossing the city by motorbike, exploring its nocturnal side.

7pm; the traffic is at its thickest now, roaring through the web of one-way streets that wrap around Surabaya’s modern downtown. The crushing heat of the day has passed and people are outside, relaxing; cafes and ice cream parlors are packed. Taman Bungkul, one of Surabaya’s few public spaces, is crowded with families. Teenagers in baggy jeans practice their skateboard tricks on the ramps and railings, and kids play with the cheap plastic toys sold by wandering vendors. And I am hungry.

Food is a passion in Surabaya, and the best place to eat is on the streets. Since sunset the roadsides have been lined with makeshift cafes. Each has a specialty, from the ubiquitous nasi goreng, to obscure regional dishes. Some are mediocre, some are excellent, and some are famous. Roti Bakar Citras is in the latter category. On a roaring side-street off Jalan Kertajaya, wonky tables are set up along a narrow strip of pavement. I order a sweet coffee – the first of many tonight – and one of Citras’ famed toasted sandwiches. 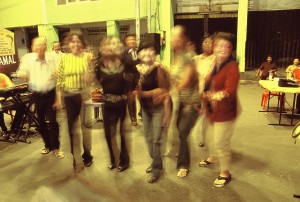 9.30pm; north of the city centre, past the Heroes’ Monument, towering into steamy darkness, along dark streets to Chinatown… The thoroughfare of Kembang Jepun is closed to traffic, and plastic chairs and tables are set out under the red Chinese lanterns. This is Kya Kya, the al fresco dining strip held every night. At the end of the street a gaggle of women – of a certain age – are slyly knocking back Bintang beer and dancing enthusiastically to karaoke dangdut.

From Kya Kya I drive east, way out into the suburbs along streets where lamps burn in simple night stalls, and burly security guards lounge at the gates of middle class compounds. Jembatan Merr, the bridge over the Kali Jagir River, is packed. Pavements are lined with worn mats and low tables, crowded with young couples. Coffee again for me, and some steamed peanuts in a twist of old newspaper from a vendor. It is after 11 o’clock and I notice that the traffic has thinned, only a few motorbikes streaking through the night. I finish my coffee, drop a few coins in the cup of the buskers playing battered guitars, and head back for the centre.

Tengah malam – midnight. The downtown streets have an edgier feel. Shops and restaurants are closed, though here and there lights blaze in an all-night warung or internet café. Huge mobs of youths in skin-tight jeans and black sweatshirts crowd the pavements, vigorously revving the engines of their motorbikes. Every Saturday these motorbike gangs gather in Surabaya, racing along dark streets and cruising the city in convoy. I fall in among one of the gangs for a while, and they call out cheerily to me despite their sinister appearance: “Hello mister! Good evening!”

I make a sharp turn into a side street to avoid a police checkpoint and head north again. The streets of the Old City are eerily empty. I catch the smell of garlic and onion skins, and see one ghostly becak creaking through the night. This part of the city, with its narrow alleys and derelict shop-houses, is a creepy place at night and I am glad when I see bright lights on a street between Chinatown and the Arab Quarter. Men in rubber boots are lugging barrels of fish from trucks and tough Madura women are haggling over prices. The fish market has been open since late afternoon and the ground is slimy underfoot. The air is pungent with fish and kretek cigarette smoke.

Tiredness creeps up. The dark band of the Kalimas River cuts through the night as I speed along empty streets. The next two hours blur into a jumble of brief images: a pair of youths in hooded sweatshirts furtively marking a wall with graffiti; a group of men seated around a television in a narrow, blue-walled room; streetwalkers of questionable gender stepping suddenly from the shadows; the shark-and-crocodile statue that commemorates Surabaya’s founding myth starkly white in the darkness; an enormous transvestite in a limp red dress striding along the cracked pavement, and the shadowy outlines of becak, loaded with mysterious bundles, rolling through the gloom.

I am tired, and hungry, and surprisingly cold. I find a simple all-night café on Jalan Mayjend Sungkono. Indonesian pop music is playing on the stereo, and a boy with weary eyes serves me a bowl of Madurese soto and a cup of sweet, grainy coffee. A shining SUV pulls up on the street outside. Three obviously drunk men stumble out and order food. I have a good idea where they have come from: most of Surabaya may be sleeping, but there’s a place where there’s still something going on.

3am – Jalan Dolly. Somewhere among the graveyards and working-class kampungs on the high ground above the Banyu Urip Canal the narrow streets of Dolly and Jalan Jarak are packed. Taxis and motorbikes clog the road and the throb of high-volume dangdut music shakes the air. This is Surabaya’s most notorious corner, claimed – wrongly, apparently – to be Southeast Asia’s biggest red light district. Wonky neon signs glow along the shop-fronts and bright strip lights shine in big-windowed “guesthouses” where bored women with blond-streaked hair and short skirts lounge on sofas, waiting. I’m too tired to face the rough gloom of the dangdut bars, so I opt for a soft drink at a roadside stall. No one bothers me and the place seems lively, almost festive. But I remember the reports I read almost weekly in the Jawa Pos of trafficked women, some of them horrifyingly young, in the brothels here.

As I leave Dolly I sense a change in the rhythm of the night. The darkness is as heavy as ever, but there is a little more traffic on the roads: the people who have been awake all night are beginning to meet the early risers of the coming day.

Beside the river the Keputran vegetable market is a blaze of light. All night trucks have been rolling in from the East Java hinterland and porters squelch through the mud under enormous loads of carrots, onions and beans. The workers and stallholders seem to get through the night on a brew of ready humor, and I am met with cheerful greetings and bursts of riotous laughter. Then I hear something above the voices: the loudspeaker of a mosque across the river has been switched on and a taped prayer is playing into the darkness. The end of the night is within reach.

From the market I drive south through silent suburbs until I reach Mesjid al-Akbar, the Great Mosque, better known as Mesjid Agung. The summit of the Ottoman-style minaret is floodlit, burning like a candle flame against the blackness. As I arrive men in clean white shirts and loose tartan sarongs are hurrying up the steps and into the cavernous interior. I can hear the low hum of traffic on the toll road beyond the mosque, and birds are singing in the darkness. Through the arched doorway I see the men forming neat lines, facing towards Mecca, their backs to a faint white stain on the eastern edge of the night. A woman in a loose head-covering pads swiftly across the marble floor and suddenly the loudspeakers crackle into action. “Allaaaaaaah uh Akbar…” The men bow and kneel in unison; the night is over.

As I ride away from the mosque people are out jogging in the first light. Buses and trucks are rolling on the big streets now and a pearly color is leaching into the sky. The new day is beginning and Surabaya is showing a different face. But I am going to bed…

2 thoughts on “Surabaya: before sunrise”